Since I draw these Lunch Bag Daddy Doodles every day, why not kill two birds with one stone and join the Inktober initiative too? It’s a challenge put forth by the very talented Jake Parker to draw an ink drawing every day during the month of October. I think I can do that!

My tools of choice are the Kuretake #13 brush pen, Micron pens and a Windsor & Newton traveling watercolor set.

My kids used to go a whole day… a whole 6-9 hours without hearing from or even thinking about their old man. Those must have been good days. I’m sure they’ll remember them fondly.

A few years ago I came up with an idea that changed all that: Lunch Bag Daddy Doodles. Since then, almost daily, I’ve drawn a doodle on a small card or their lunch bag for each of my three kids. Poor kids. Just as they’re about to enjoy a blissful lunch break, there’s my doodle, reminding them that daddy’s watching them, always watching. 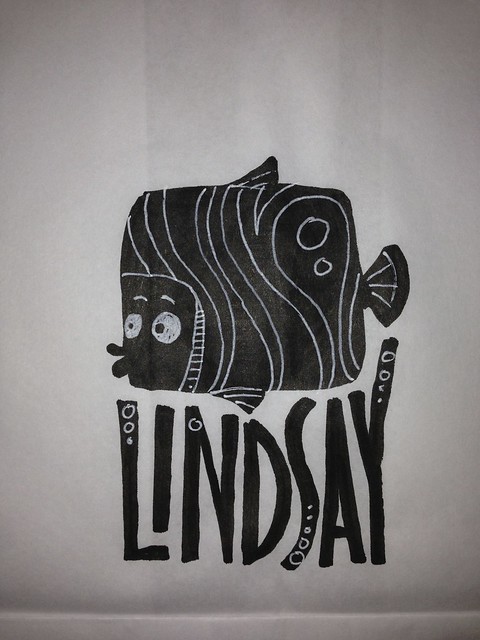 I figure my doodles served a few purposes: 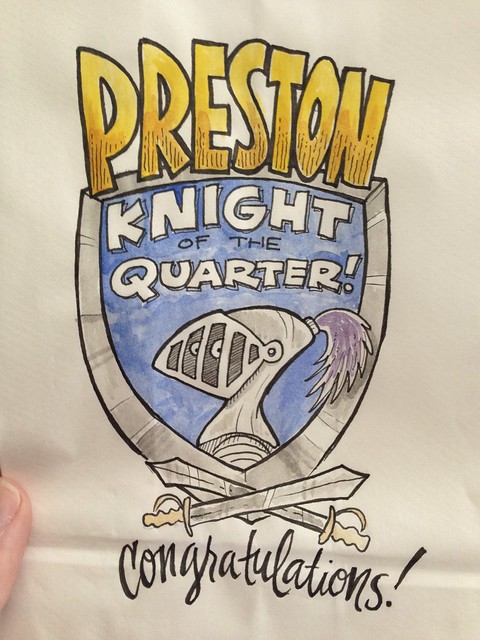 Even their friends have joined in and have requested their favorite characters be drawn, hopefully making my kids really popular. I’m sure their popularity is all my doing.

Anyway, if you’d like to see a few more, head on over to my flickr page, STAT! 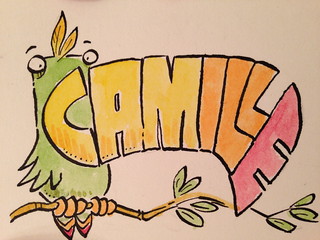 Ah, Comic Con, what a strange and wonderful convention. Last year was the inaugural Salt Lake Comic Con and that thing broke all sorts of records. The largest inaugural comic convention anywhere, and the largest convention in Utah’s history, period. My son, being a fan of Mario and anything Nintendo, and me loving comic strips, we thought it would be fun to check it out. The booths were fun, the crowd was diverse, but what stood out the most to me was Artists Alley. Real people with real passion showing off their talents, and making a few bucks while doing it.

My son (an amazing pixel artist) and I were so inspired we reserved a table for the next year, and spent the year preparing ourselves. I wasn’t so concerned with making a million bucks, I just wanted to be a part of the experience, rub shoulders with other artists and hang out with my boy for a few days.

That being said, I wasn’t going to just show up. I had to stand out somehow, and the idea of creating a sign that was different from all others seemed like a good way to do that. Building and crafting this thing was quite a stretch for me and that was another reason I decided to tackle it.

Vinyl banners are everywhere at Comic Con, so a wood and clay sign seemed like the obvious alternative… obviously. I sketched up several rough ideas focussing on my love of hand-drawn typography and character designs.

Once I landed on a sketch I liked, I scanned the pencil work and did a rough color study on my iPad mini using an amazing app called Procreate.

I purchased an unfinished 2’ wood table top for the base and a 1” thick board for the lettering. To get the lettering templates just right, I placed the scan of my sketch in Illustrator and blew it up to the correct size. With the artboard tool, I created a page for every letter (or two) and printed each template out. I then cut the letters out to use as my template.

The sketch in Adobe Illustrator, getting ready to print each letter on its own page to create the templates.

Cutting out the template with the x-acto knife

The letter templates laid out on the 1″ board.

At the same time, I asked around to see if anyone had a scroll saw I could borrow. My next-door neighbor let me borrow his father’s saw I remember using to help my son with a pinewood derby car for scouts years earlier. Which, by the way, was the only time I’ve ever used a scroll saw, so I was a bit nervous about this part.

Testing my skills on the scroll saw.

I loved this part. I really enjoy working with tools and wood, and the hours flew by as I cut out each letter.

I then added a layer of joint compound to the table-top. When I add the clay sculptures to the wood, the joint compound adds texture to the wood so that the clay will stick. The letters were glued into position with wood glue, and the sculpting began.

All the letters cut out and ready to glue onto the table top. Well, after a little sanding to fix the rough cuts.

An old friend of mine invented an architectural compound he calls Skratch that I decided to try because it air-dries to a very hard and sandable state without cracking. Perfect for this project since there was no way I could throw the sign into an oven or kiln for drying. There was a bit of a learning curve with this clay. It has the consistency of a paper clay, or a papier-mâché compound. You can’t scrape or model the clay like you would potter’s clay or WED clay. It’s very fibrous, which is why I think it doesn’t crack when it dries. You just add and push around the clay to get the form you want. My first character took a very long time to sculpt, and was frustrating. But once I got the hang of the clay, the others came much easier.

Once the sculpting was completed and dried, I painted the whole sign with white primer to give it a consistent color base throughout. I then used gouache to paint the characters. This was another first. I’m familiar with acrylics and watercolors, but gouache is new to me. It’s kind of a mix between the two. Add enough water and it’s transparent like watercolors. Use it directly out of the tube and it’s opaque like acrylics. I liked very much how versatile it was and allowed me to make the sign look painterly.

Finishing up the painting!

I finished the sign with only a day to spare for Salt Lake Comic Con. I was excited to put the sign up and talk about it all throughout the convention to the hoard of admirers that would surely stop and take a longer look at something so different. I mean, my updates on Facebook got more positive responses than anything I’ve ever posted.

Look how puny it looks in the Comic Con environment.

Once up however, I felt quite deflated. While it looked big on my drawing table at home, it was miniscule compared to the millions of banners and large art prints my comic con neighbors had. It was barely seen by the crowd-at-large. Many supportive friends and family came by to see the final product, for which I am very thankful.

I actually anticipated the low response to a point, but what kept me going while making the sign was that I was doing something I had never done before. I had an idea in my head, planned it out the best I could, and it actually came together. I was creating and learning, and for that alone, this project was totally worth it.

I’m posting this one to release snow-vibes out into the universe. My kids and I would like to build a real snowman sometime this year, that would be nice…
1 comment

Going my way? Bet you are eventually.

I’ve always thought of it as a barren meteor too.

This is one of my least favorite Twilight Zones, which made it difficult to come up with something worthwhile. I think it turned out fine just the same.